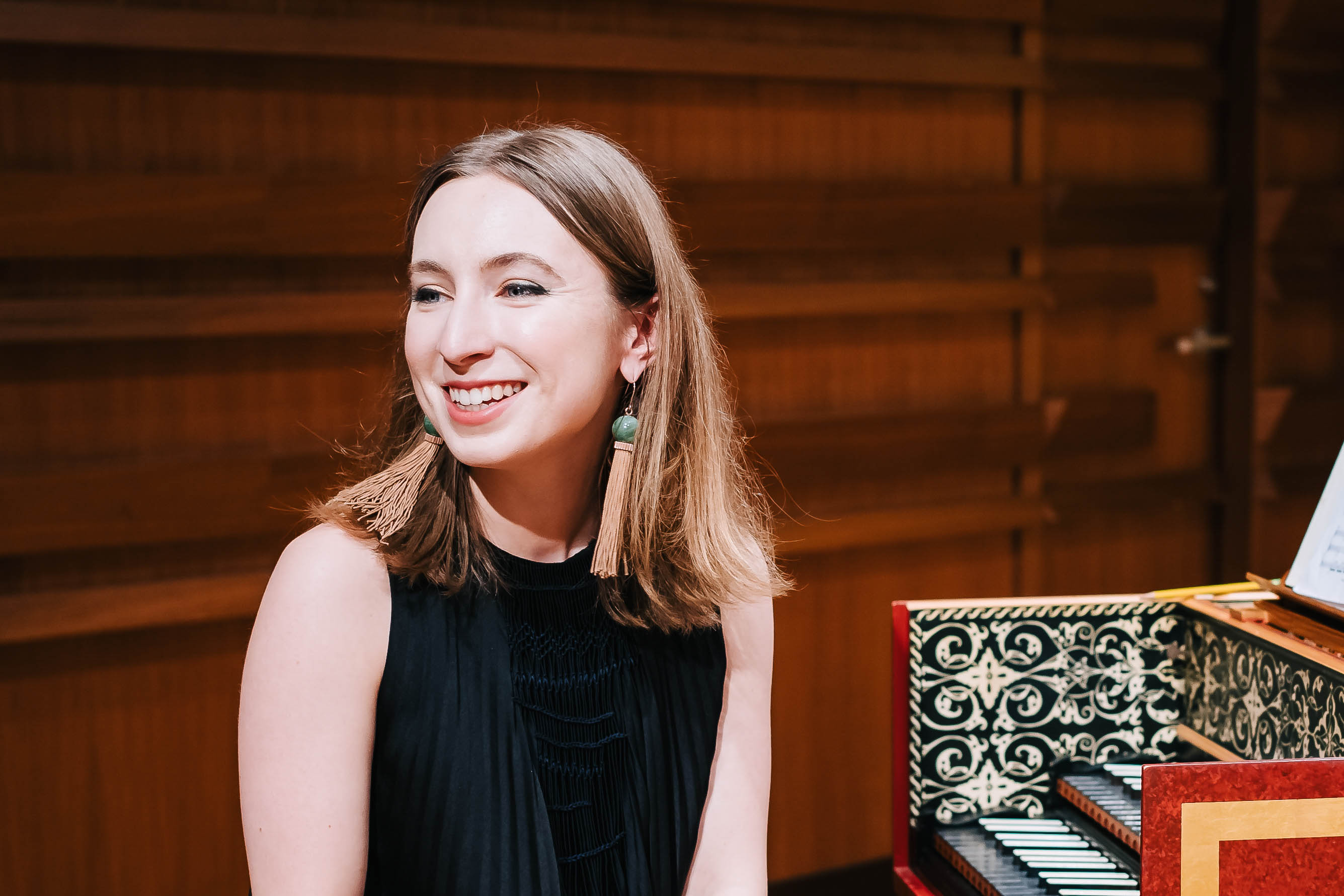 Conductor Sir Thomas Beecham famously described the sound of a harpsichord as “two skeletons copulating on a tin roof," or, a lesser known description, “playing a birdcage with a toasting fork.” Caitlyn Koester, like many harpsichordists so charmed by the instrument, is here to argue the opposite.

In François Couperin’s L’art de toucher le clavecin, he stresses la belle souplesse (suppleness) and soft, “feminine” hands required for harpsichord playing; that the search for this most perfect touch was the objective of the clavecinistes before him. Enamored with this search for la belle souplesse, harpsichordist Caitlyn Koester embodies the same spirit in her approach, demonstrating what makes the notorious “plucking machine” so enchanting.

Hailing from the beautiful Pacific Northwest, Caitlyn Koester surrounded herself with music in a multifaceted way from a young age. Throughout her childhood, piano lessons led to an enthrallment with learning the varied likes of Bach inventions, Elton John songs, and writing her own music. By high school, Caitlyn was dabbling in jazz and classical chamber music, accompanying local musicals, and helping to raise money for music education. Her performances in Portland and Seattle with Ten Grands raised money for countless young people in the PNW to gain access to music lessons, and jumpstarted a passion for involvement in arts education. Today, Caitlyn maintains a studio of 15 private students, and is excited to expose her students to a rich and varied musical education.

During her own education, she was lucky to fall under the mentorship of harpsichordist Joseph Gascho, who through his great influence revealed an intense love for playing the harpsichord and early repertoire. Caitlyn is a recent graduate of the Juilliard School’s Historical Performance program, where she relished in playing harpsichord with the Juilliard415 baroque orchestra. In Juilliard415, Caitlyn played under the direction of celebrated conductors and musicians including Monica Huggett, Rachel Podger, William Christie, Masaaki Suzuki, Robert Mealy, Alfredo Bernardini, and Jonathan Cohen, and studied with harpsichordists Richard Egarr, Béatrice Martin, Avi Stein, and Peter Sykes. She was the featured harpsichord soloist in the Juilliard415 Orchestra’s performance of Bach’s 5th Brandenburg Concerto in 2018. She currently studies with harpsichordist Corey Jamason.

In addition to a busy performance schedule, Caitlyn has cultivated a presence in arts administration since the age of 14. She began as a volunteer with Portland Piano International. While at the University of Michigan, Caitlyn worked as an Artist Services and Programming intern for the University Musical Society. Over summers, she interned at SFCM Pre-College, San Francisco Performances, and San Francisco Opera, where she created and called supertitles for Merola Opera Program performances. During her graduate education in New York, Caitlyn worked in PR and marketing for classical musicians as the Office Manager for 8VA Music Consultancy.

Recent engagements include roles as both Assistant Music Director and harpsichordist for dell’Arte Opera’s production of Francesca Caccini’s La liberazione di Ruggiero, performances and coaching of Purcell’s Dido and Aeneas with Ars Music Chorale and at Bard College, and performances in Montréal and Taiwan with her own chamber ensembles. Caitlyn looks forward to recording the complete obligato sonatas of Graupner with violinist Naomi Dumas on Montréal’s ATMA label next season. Finding music of the 17th and 18th centuries to exemplify humanity in its purest forms, Caitlyn aspires to maintain a musical life as a harpsichordist and educator who exposes and nurtures a love of this repertoire among wider audiences in the United States.