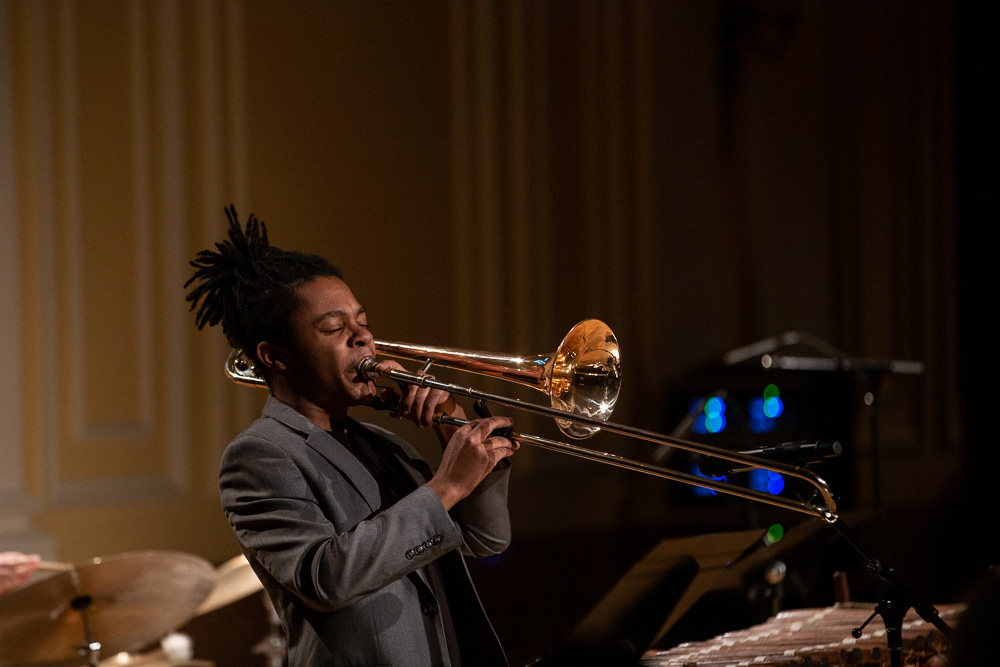 Performer and composer Caleb A. Smith is a multi-faceted artist who hopes to use his art to present relevant, relatable, and thought-provoking narratives to his audience. Caleb received his Bachelor’s in Jazz Performance from Oberlin Conservatory of Music, where he was able to attend on a full-tuition scholarship. Currently, Caleb is pursuing his Master’s Degree from Boston’s New England Conservatory of Music. He has been fortunate enough to study with musicians such as trombonist Robin Eubanks, as well as with performer composers like Jason Moran, Vijay Iyer, Gary Bartz, and Billy Hart.

‍
As a performer, Caleb has played with a vast selection of artists including five-time Grammy Award winning American visionary Lauryn Hill at the 2018 Rock N Roll Hall of Fame Induction Ceremony presented by HBO, a performance with trumpeter Terrance Blanchard as part of Cleveland’s Annual Tri-C Jazz Festival, and at the New England Conservatory of Music with bassist Dave Holland. He has played with an array of different ensembles ranging from small jazz-based combos, concert/marching bands, a symphony orchestra, jazz big bands, Gospel groups and as part of a horn section in pop groups. Caleb has also given numerous performances in and around Cleveland at venues such as The Bop Stop at the Music Settlement, Severance Hall, and Akron’s acclaimed BLU Jazz+ Club.
Composition is an integral part of Caleb’s artistry and artistic process. He hopes that, through his original work and collaborations with others, he will make himself vulnerable to his audience and not only present themes and narratives associated closely with his heart and personal life, but also those that are associated with being Black in America. He has had the privilege to study composition at prestigious programs such as the Kennedy Center’s Betty Carter Jazz Ahead (where he had his original work performed on the Kennedy Center’s Millennium Stage) and at the Banff International Workshop in Jazz and Creative Music.

‍
Caleb firmly believes that teaching is an integral part of any society and is very passionate about spreading the knowledge he has obtained to other people on their journey.