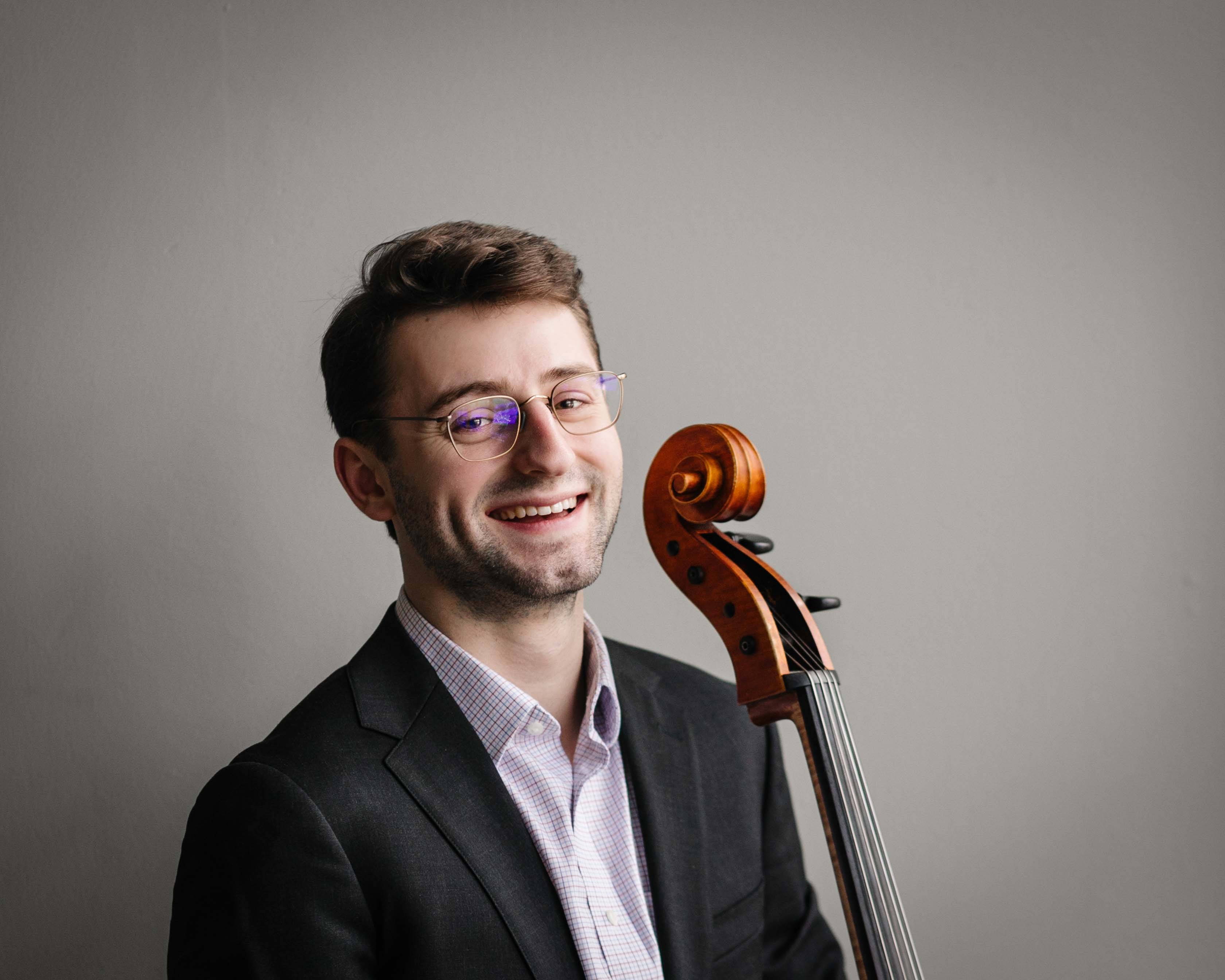 Daniel Scoggins is a New York City-based cellist who has enjoyed bringing music to a diverse array of audiences and performance spaces in his young career, performing as a soloist and orchestral musician in locations ranging from farmhouses in rural New Hampshire to auditoriums such as Carnegie Hall and the New World Center in Miami. Recent performance highlights include an appearance as a soloist with the Manhattan School of Music orchestra under the baton of Leonard Slatkin, performing Benjamin Lee’s Concerto for String Quartet and Orchestra in February 2022.
In the summer of 2022 Daniel was invited to be a faculty member at the Pacific Music Institute in Honolulu, Hawaii, where he taught and performed as an orchestral teaching fellow.

As an orchestral musician, Daniel has performed under renowned conductors such as Michael Tilson-Thomas, Marin Alsop, Robert Spano, Leonard Slatkin and Timothy Weiss. In the summer of 2021 Daniel sat as principal cellist of the National Orchestral Institute+Fellowship philharmonic in a performance conducted by Marin Alsop at the Wolf Trap National Center for the Performing Arts. Daniel is currently a substitute cellist for the New World Symphony.

As a young musician growing up in Portland, Oregon, Daniel was drawn to the versatility of chamber music and now continues to seek out new and unconventional ways to make genre-breaking music in small ensembles. Daniel’s piano quartet was named a two-time winner of the Manhattan School of Music’s Fuchs competition, and previously his string quartet was selected as a member of Oberlin’s Advanced String Quartet Seminar. Daniel has also had the privilege to perform unconventional repertoire with members of contemporary ensembles such as Eighth Blackbird and A Far Cry, and has been mentored closely by members of the Cavani, Pacifica, American, and Brentano Quartets.

In addition to being a two-time fellow of the National Orchestral Institute, Daniel spent multiple summers studying with Hans Jørgen Jensen at the Meadowmount School of Music, and has attended numerous other summer festivals including the Orford Academy of Music, the Apple Hill Summer Chamber Music Workshop, and the Domaine Forget Summer Masterclass Program.
Daniel holds a Master’s degree in cello performance from the Manhattan School of Music, where he studied with Julia Lichten, as well as a B.M. in cello performance from the Oberlin Conservatory of Music, where he studied with Darrett Adkins. He previously studied with Marilyn de Oliveira and Dorien de León in Portland, OR.

In his free time Daniel enjoys running, playing pickup soccer in NYC’s Riverside Park, and perpetually trying to make a perfect cup of coffee in the morning.