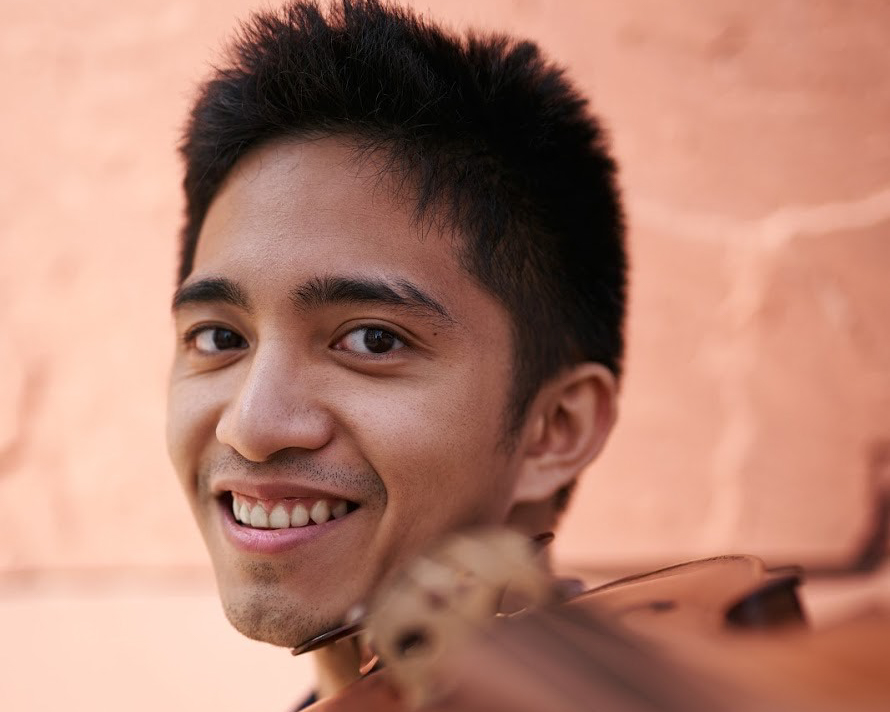 Originally from Uniondale, New York, 22-year old first-generation Filipino-American Jay Julio (they/them) is a violist-violinist-mandolinist, teacher, and composer-arranger based in Manhattan. They have shared the stage with Broadway singers, pop stars, and some of classical music’s hottest young talents in performances from Washington D.C. to the Philippines, and can be heard on Broadway Records. Their compositions and arrangements have been heard at the Cannes Film Festival and at New York Fashion Week and performed by soprano-double bass duo confluss.

Jay has received fellowships to attend the Music Academy of the West, Orpheus@Mannes, and the Aspen, Manchester, and Lake Tahoe music festivals; they have also spent summers at the Yellow Barn Young Artists Program, the National Symphony Orchestra’s Summer Music Institute as a Young Artist of Color, and have been invited to the Spoleto and Pacific Music Festival. They serve on the substitute viola & chamber music faculty at the Manhattan School of Music and as a Teaching Fellow at the Juilliard School’s Music Advancement Program.

As an orchestral musician, Jay has performed with the Symphony in C and Kaleidoscope Chamber Orchestra. They appeared alongside alumni of the YoungArts Foundation and violinist Joshua Bell in a performance at the 25th anniversary gala of the Elton John AIDS Foundation.

Jay is the violist of the Madkoi Quartet, a string quartet founded in 2015 at the Manhattan School of Music, and with them has collaborated with numerous NYC-based composers in world premieres and recordings. They have played at Lincoln Center’s College Cabaret, in the basement of Philadelphia’s BOK Bar for a Massivemuse in collaboration with the Philadelphia Inclusive Arts Festival, and for the prince of Italy, Emanuele Filiberto, in a masked ball presented by Italian magazine Uomo Moderno.

A prizewinner in national competitions held by the National Federation of Music Clubs and the Music Teachers National Association and recipient of a 2019 Juilliard Career Grant, Jay is indebted to the Virtu Foundation for their loan of a Douglas Cox viola. After taking their first viola lesson at age 14 at the Mannes Preparatory Division, Jay graduated from the Interlochen Arts Academy at 16 with Renee Skerik with their highest musical honor, the Young Artist Award, received their BM in Viola Performance from the Manhattan School of Music under Karen Ritscher on full scholarship, and is finishing up their MM at the Juilliard School on a full-tuition Susan W. Rose Fellowship under the tutelage of Heidi Castleman, Misha Amory, and Matthew Lipman. They look forward to beginning a new chapter as one-third of the second cohort of the LA Orchestra Fellowship. Other important mentors include Anne Lanzilotti, Mari Kimura, and Ron Blake. For rhythm, Jay studies poetry.