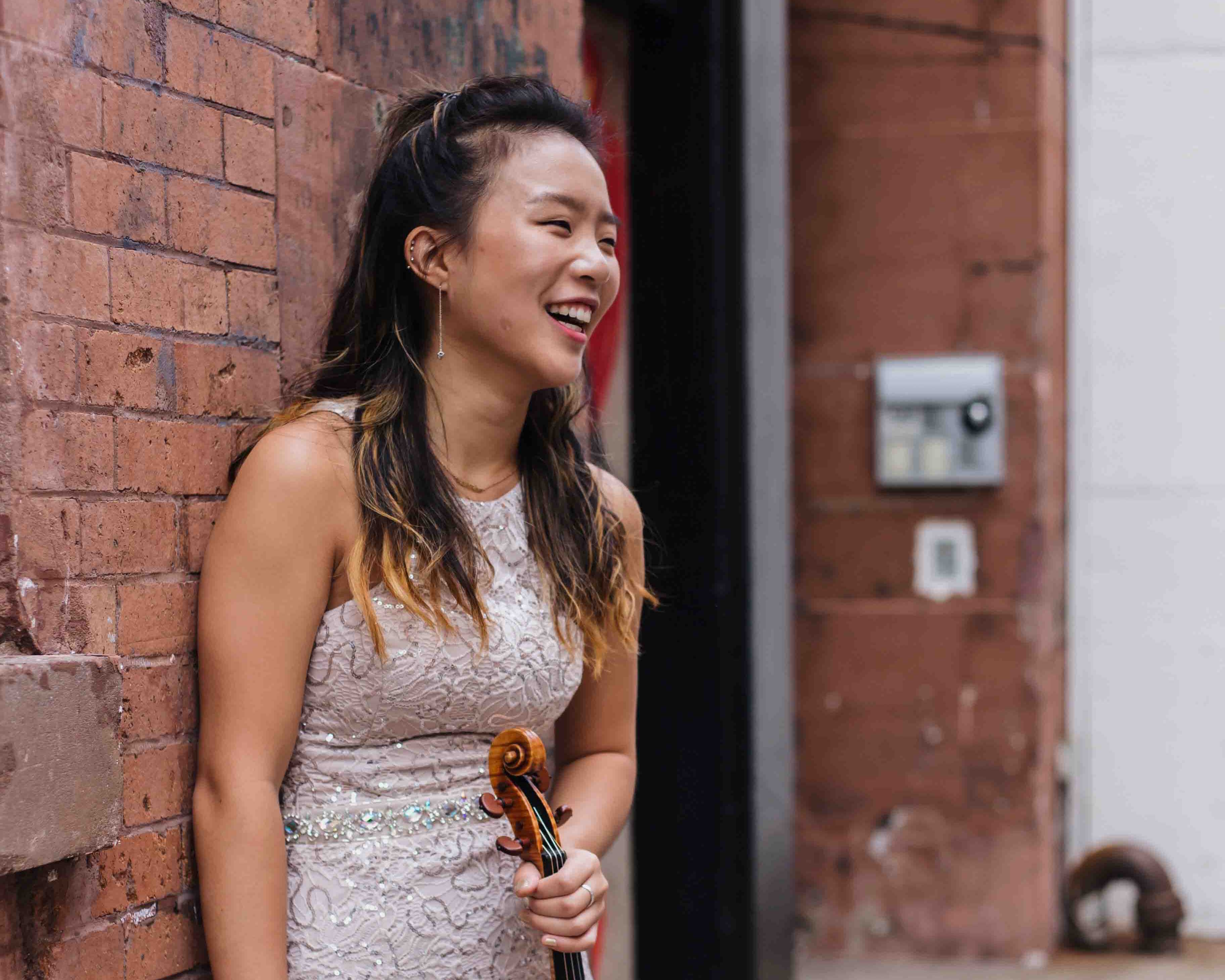 22-year old violinist, Katherine Woo, made her Kennedy Center solo performance debut at the age of 11 as the grand prize winner of the 2009 INPSS International Youth Praise Festival, where she was named “The Best Performer of 2010.” A few years later, she made her Carnegie Hall solo debut at the age of 14 as a prize winner of the American Protégé International Piano and Strings Competition. After three years of studying at the Juilliard Pre-College program and two years of pursuing a Neuroscience and Behavior major on the Pre-Health track as part of the Columbia – Juilliard Exchange Program, she recently completed her Bachelor of Music degree as a recipient of the Jerome L. Greene Fellowship under Ms. Sylvia Rosenberg and Mr. Masao Kawasaki at the Juilliard School. In the Fall of 2020, Ms. Woo will be returning to the Juilliard School as a Master of Music degree candidate.

Born in 1998 to parents of Korean descent, Ms. Woo started studying the piano with her mother at the age of 6, and went on to study with Mrs. Kuo-Pei Cheng Lin. She was chosen as the 2012 and 2013 MTNA South Carolina state winner and competed at the Southeast Regional Piano Competition. She was also awarded 1st prizes in the 2013 South Carolina Music Teacher’s Association State Audition, 2012 Young Artist Orchestra Concerto Competition, Lawrence Hamilton Morton Piano Scholarships, the 2012 and 2011 Crescent Music Club Competitions, and 2nd prize at the 27th, 26th, and 24th CYS/Carolina First Young Artists Concerto Competitions, as well as Gold Prize at the 2009 INPSS Festivals. Ms. Woo has performed with the Young Artist Orchestra and has played in a master class for Yoshikazu Nagai at the Southeastern Piano Festival.

Last summer, Ms. Woo was invited to perform in collaboration with Walt Disney Animation Studios as part of the World Premiere of “A Decade in Concerto” in Aspen, Colorado and has performed in venues such as the New World Center in Miami, the Concertgebouw and NedPho in Amsterdam, Tivolis Koncertsal, Smetana Hall in Prague, National Kaohsiung Center for the Arts Weiwuying Concert Hall, National Taichung Theater Playhouse, TNUA Concert Hall, Benedict Music Tent in Aspen, Colorado, Merkin Concert Hall at Kaufman Music Center, Terrace Theater at the Kennedy Center, Weill Recital Hall and Stern Auditorium at Carnegie Hall, and Alice Tully Hall at the Lincoln Center.

Among many other honors, Ms. Woo is a two time concerto competition winner at the 2017 and 2018 Aspen Music Festival and School, resulting in performances with the Aspen Philharmonic Orchestra at the Benedict Music Tent and was chosen to participate in the Wu Han Finckel Chamber Music Program in the summer of 2017. Last year, Ms. Woo advanced to the final round in the 2016 Juilliard Concerto Competition and was also invited to perform at the New World Center as a 2016 National YoungArts Finalist where she was named a finalist in the process of selecting the 2016 U.S. Presidential Scholars in the Arts. Previously, in the summer of 2016, Ms. Woo was invited to perform and tour Europe with the National Youth Orchestra of the United States and also participated in the 2016 Aspen Music Festival and School later that summer. Additionally, she was selected as the alternate winner in the 2015 Juilliard Pre-College Concerto Competition, and also performed a solo recital at The Juilliard School, as well as at Sun City, Hilton Head Island.

In 2015, Ms. Woo was named a Young Arts Winner as well as finalists of the Markov Young Artists Competition, the PepsiCo National Young Artists Competition, and the Queens Symphony Young Soloist Competition, and appeared on NPR’s From the Top with Christopher O’ Riley. Also, she was invited to participate in the 2014 and 2015 New York String Orchestra Seminars, resulting in four more performances at Carnegie Hall. Ms. Woo has performed with the Young Artist Orchestra twice, Anderson Symphony Orchestra, Clemson University Symphony Orchestra, and the Carolina Youth Symphony. Also, as the first prize winner of the 2015 Young Artist Orchestra Concerto Competition, she performed with the Hilton Head Symphony Orchestra. Ms. Woo was awarded 2nd prize and the “Audience Award” at the 2013 Salome Young Artists Competition and was chosen as a soloist at the 2014 and 2015 Piccolo Spoleto Rising Stars. She attended the 2015 and 2014 Aspen Music Festival and School and the 2013 Heifetz International Music Institute. While at Heifetz, Ms. Woo traveled to Washington D.C. to perform the national anthem and “God Bless America” at the Washington Nationals baseball game. She attended the 2012 Bowdoin International Music Festival and Ms. Woo was featured as a soloist with the Hilton Head Symphony Orchestra at the “Symphony under the Stars” concert. She also performed with the World Mission Youth Orchestra at the Kennedy Center in Washington DC, in 2011.